On my first trip to Boracay last year, which was during my birthday, I felt that the time we spent was too short to miss many. The reason why even before we left the island I wished of going back to experience and enjoy what we failed to see. Indeed God was so good that even before 2011 bid goodbye he made me win another Free Accommodation and this time at Astoria Boracay.  I cannot contain my happiness and excitement of course as this means another worthy spree for us.

January, right after picking up my voucher at Pioneer Highlands I immediately rushed to Debenhams to shop for beach clothes. Good thing that the favorite shop was on sale that time, after two or three visits I completed my set. 🙂

February, at the start of the month I luckily chanced an airline promo. I grabbed it right away since the same was an open date at Astoria. The round trip ticket to Kalibo was priced at P4, 532.40 all in (including travel insurance) for three pax. Yup, I booked for three pax because Nanay was with us, chaperone hehehe. SAM was supposed to fly with us also but after a series of deliberation, read here, we decided not to tag her around.

Booking in Astoria was hassle-free, the reservation and confirmation was a breeze. By the way, I had to pay an additional P3, 000 for Nanay’s accommodation (daily breakfast included) for two nights since the GC I won entitles two persons only to 3days/2nights accommodation in a deluxe room. Big thanks to Ms. Rizza of Astoria for all the assistance. 🙂

Because this time we’re flying via the Manila-Kalibo route, I decided for us to spend overnight in Kalibo for the return flight. After two weeks of scouting for a decent hostel in Kalibo via TripAdvisor I booked for Ati-Atihan Festival Hostel. Paid P1, 300 for an overnight stay with free breakfast for three, not bad at all. This time, I have to thank Jacky for the speedy booking.

Fast forward to March 22, the date we all waited! The ETD of our flight was at 12:10pm at Domestic Terminal 4, I made sure we left the house early so as not to miss our flight. I don’t want to stress out like last year when we arrived late at the check-in counter. The check-in procedure at the old terminal was rather fast, after paying the terminal fees I silently thanked God for the good vibes. It seemed like it’s going to be all smooth for us. 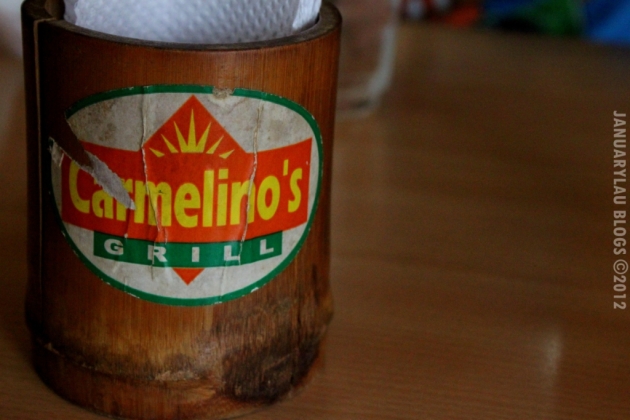 Since it was too early to proceed at the Boarding Area, we went around looking for a place to have lunch. You know how airport meals can be too expensive, so I don’t want to make it as our option. A few steps from the departure main gate was Carmelino’s Grill.

The place was perfect to lounge while having some coffee, sandwiches or even a full meal. All three of us were not in the mood to eat rice, so we ordered something light. 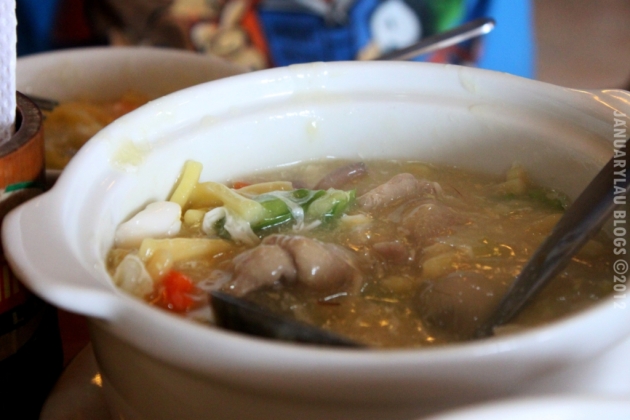 Lomi and Clubhouse only, light I say but we didn’t know at all that the serving of Lomi was big and we got two. The order taker didn’t even tell us that an order could actually fed three. We end up getting heavy with the generous portion of noodles, chicken chunks and veggies in each bowl. Though service was a bit slow, the prices were reasonable. 🙂 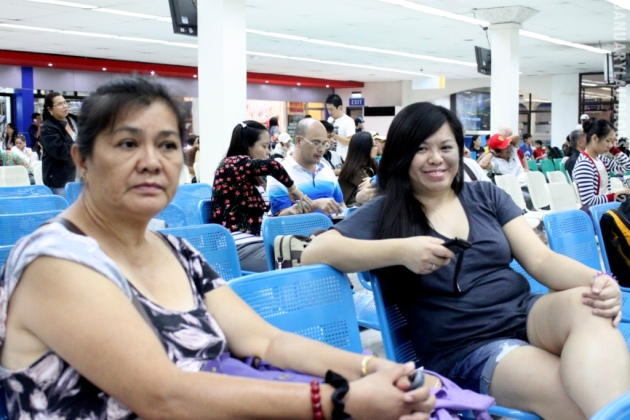 We didn’t stay long; we decided to spend the last hour at the Boarding Area. All the time waiting, I was praying that our flight won’t get delayed. I can’t help but worry that the bad reviews I read about Zest Air would happen to us too. Oh no, please not this time as this was Nanay’s first plane ride ever. Fifteen minutes before the estimated time of departure, boarding was announced. I was relieved. Hallelujah!

Despite the dampen runway that day no delays had happen. Thankful!

The airbus was a comfy ride comparable to the small aircraft we rode last year. I had my Nanay took the window seat for her to witness the stunning view from above not knowing that she had fear of heights. Yikes! Sorry, mother dear I had no idea but at least I know now, I would bear that in mind. 🙂

I didn’t get a nap the entire one hour plane ride, I was pretty excited. The moment we get off the plane, we couldn’t get enough like most of the tourist did.

Kodak moments they say, we didn’t let it passed.

The photo wall at Kalibo airstrip. Thanks to Leoncio’s ex-colleague for giving us this shot.

Right after we got hold of our baggage, we scout for van transfer going to Caticlan Jetty Port. In fact, there were too many to choose from, which were all readily available even before you stepped out of the arrival area. The rate ranges from P200-P300 including boat transfer to Boracay. 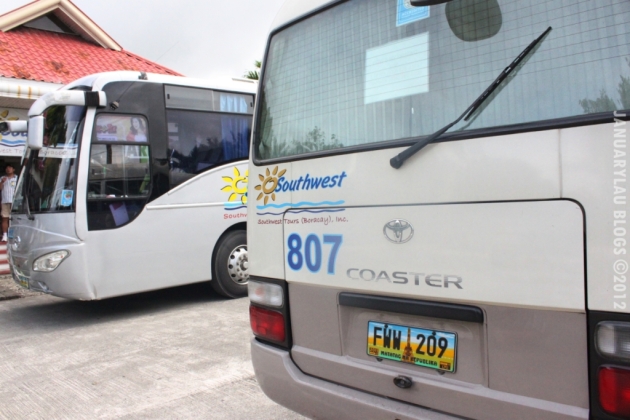 We took the classy Southwest Tours, priced at P300 each. Because it would be another 2 hours travel time, I want it to be comfortable all the way.

Southwest Tours may be pricey compared to the rest of the land transfer available thereon but I cannot comprise, first is safety and the second is convenience.  They had clean coasters and busses and what remarkable with them was they don’t maximized the seating capacity, so you get plenty of legroom to stretch out. Also, their coaster will leave in no time even if the passengers were only five, so you save time. After a 10 minute stopover in the middle of somewhere to pee and to have snack, we arrived at Caticlan. We were guided by the Southwest Tour personnel to our boat. 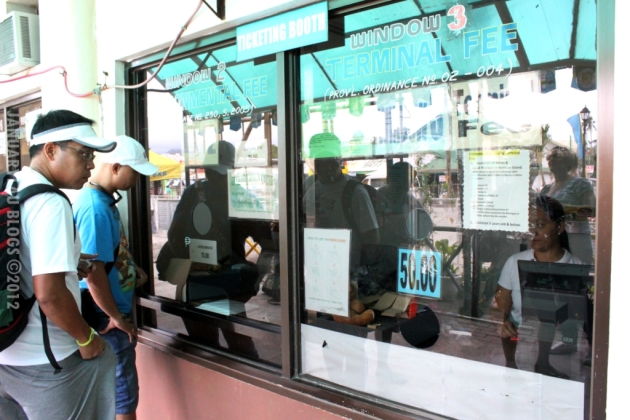 Wait, we still pay for Environmental Fee P75 and Terminal Fee P50. The inclusion of our transfer was Boat Fee only.

Southwest Tours had their own boat that will bring you to Cagban Jetty Port. The transfer was bumpy at this side of the sea nevertheless the sight of the island would calm you inside. 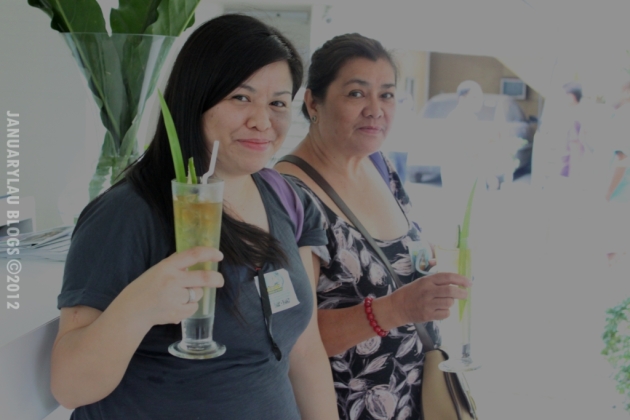 From the jetty port, we rode a trike going to Astoria, which was located at Station 1. From the main road, Astoria’s way in was nearby, the reception counter will welcome you this way. Check-in was quick that even before I finished our welcome drink we were already guided to our room. Oh btw, I was asked to deposit P1, 000 per night for the duration of our stay –this would be refundable upon check out.

Astoria Boracay is brand new, high end resort in the very heart of White Beach at Station One. 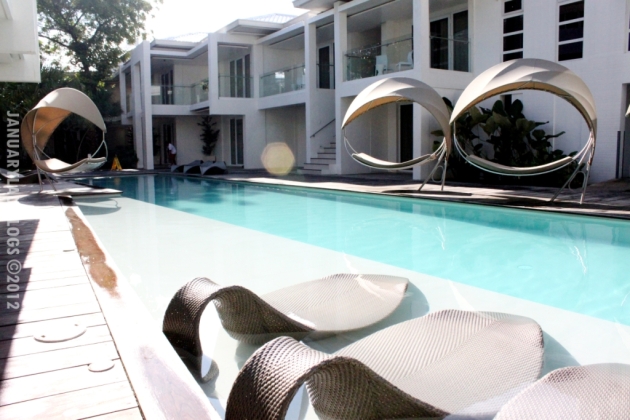 With each of the 39 rooms having a modern and stylish design, this contemporary resort is perfect for those wanting a combination of the chic and the beach.

Our room was located at the 2nd level overlooking the outdoor swimming pool, it was so inviting.

Astoria’s De Luxe Rooms were big and modern. While remained minimalist in the hue of grey and white. 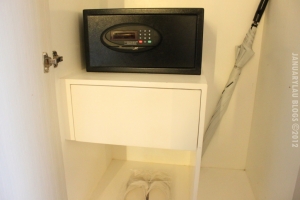 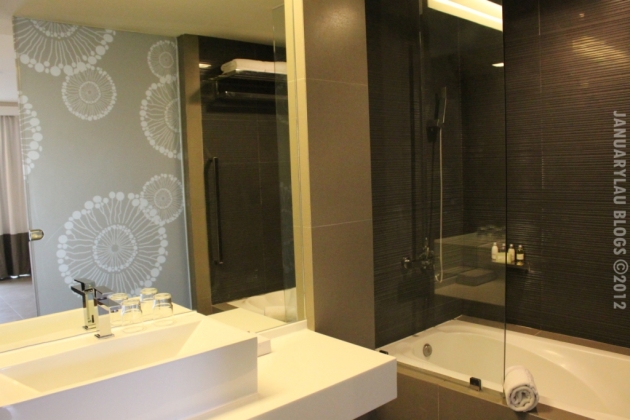 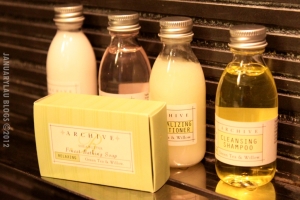 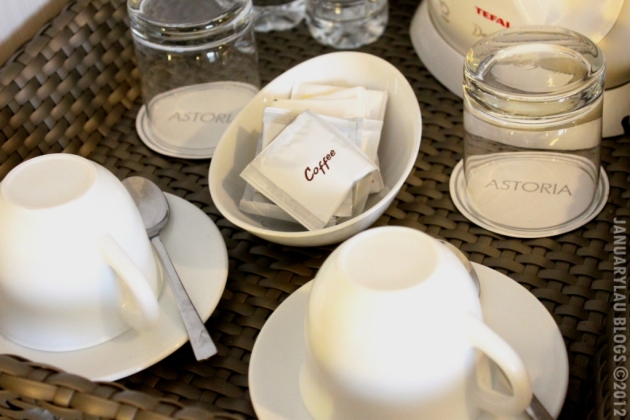 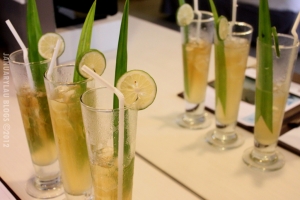 A De Luxe Room with pool access was also available at the base level likewise rooms with their own balcony was also offered. 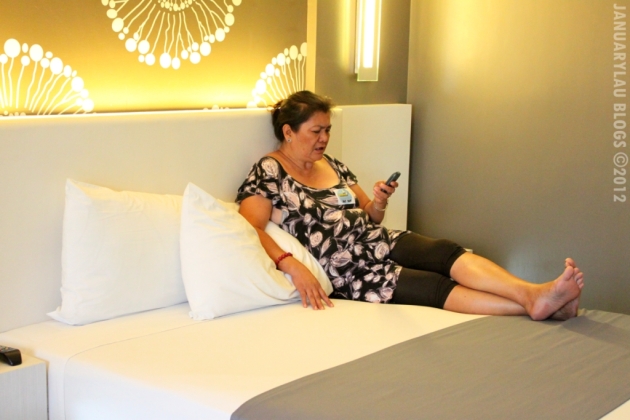 I don’t mind us getting not the best room, remember our stay was free but we never felt biases from the staffs counter to those paying guests. Other than, we felt we were treated very special.

We spent an hour or two resting at the comfort of our room, and by the time we went out for a walk at the beachfront the sun was no longer red-hot, almost hiding from the clouds.

While Boracay remained to be a favorite beach spot of local and foreign tourist, I was saddened by the sight of algae at the water’s edge. It was thick and messily scattered at the white powdery sand. And dipping my feet at the saltwater gave me a hasty second thought. 😦 Though the algae had long been a normal occurrence in Boracay, it was still a disappointment. For sure you wouldn’t want to swim and get itchy later on. 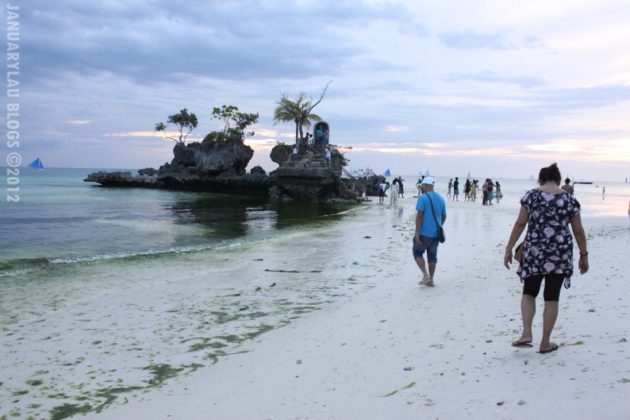 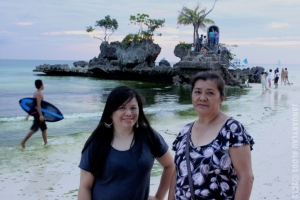 We walked at the stretch of Staion 1, until we reached the most photographed landmark in Boracay –Willy’s Rock. 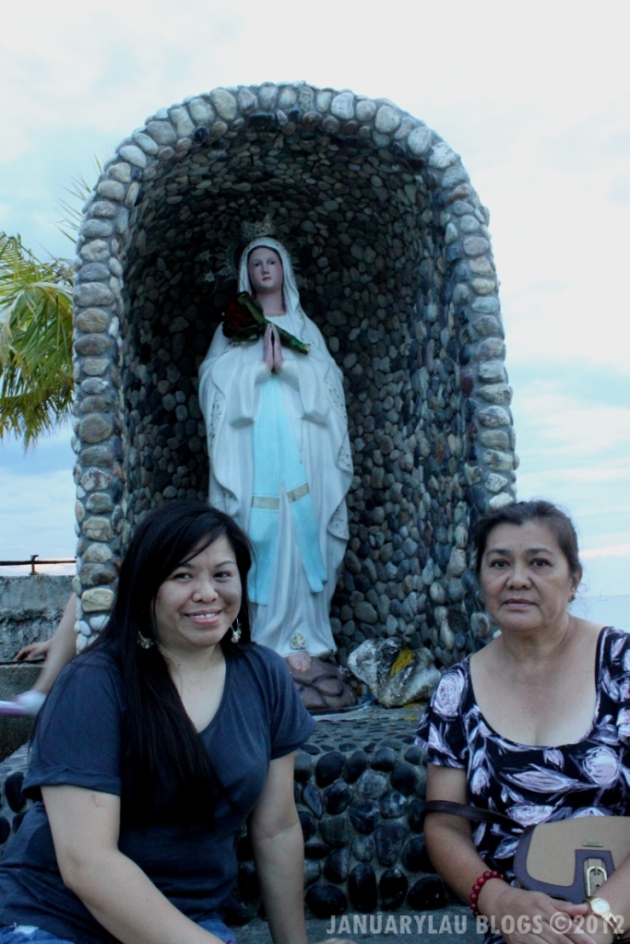 Because it was high tide during our first visit, we didn’t make it on top of the rock formation. And this time the water was shallow allowing us to climb the stairs that led to the Marian grotto sitting on top. 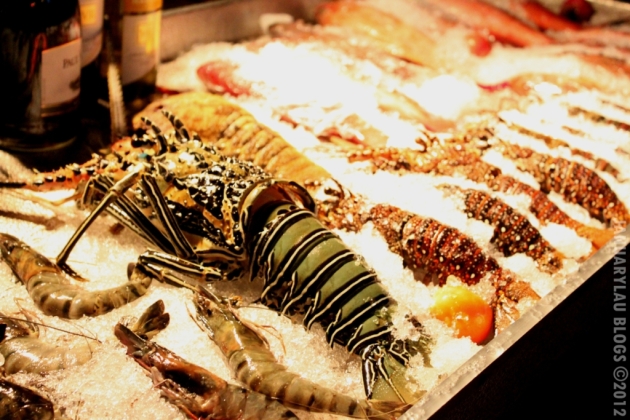 These oversized lobsters were overpriced too. 😦

Before sundown we walked back to Astoria down to Station 2 to look for a place to have dinner. We wanted Nanay to experience the seafood buffet dinner, which we sampled before. There were even bountiful of resto offering it now but those stationed near D’Mall was steep at P380. Even if wanted to splurge, we wanted to remain budget-conscious too besides we’re on day one only folks. 🙂

Far D’Mall but still at Station 2 was Kalinga Bar and Restaurant, I think they were the cheapest at P250 eat and drink all you can. After Leoncio checked the spread, we reserved a seat right away. 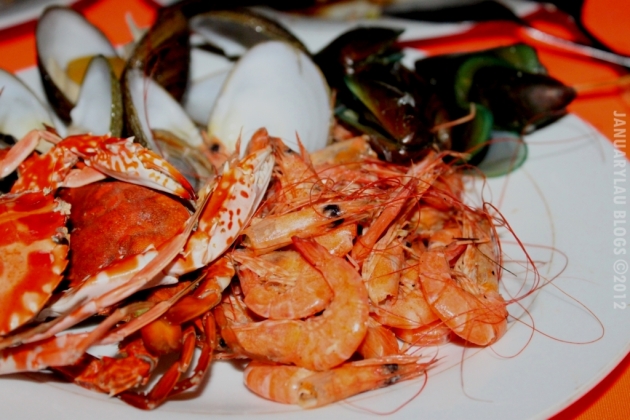 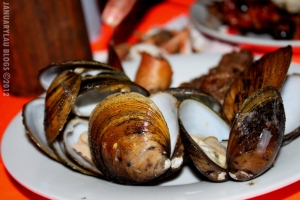 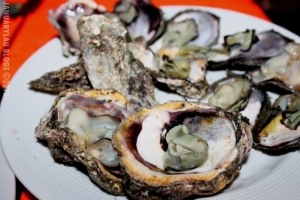 Just don’t expect much on seafood buffet offered at the beachfronts, but nonetheless we had a filling dinner over the bounties of clams and oysters, shrimp (small ones) and crabs. There’s also pork, chicken and fish dish to choose from.

We ended with the usual tropical fruits that were perfectly refreshing on a humid Boracay night.

I was mindless of the time and suggested that we should walk around D’Mall to avoid the state of food coma. Because it rained lightly too, we decided to look for a place to kill time. I was not decided for coffee but getting something sweet and delectable is a must. 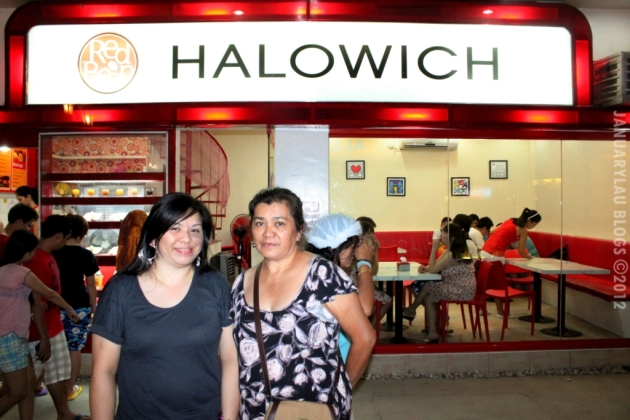 I wouldn’t say no to a cold treat that was very appropriate but I had to do a lot of convincing to my party that it’s just shaved ice more like the favored halo-halo.

It was a treat! Red Bean Hallowich’s Couple Ice was ample for the three of us. On a second note, I was expecting more mango and bananas instead of pineapples, which I less like.  Nevertheless, we emptied the bowl in no time. 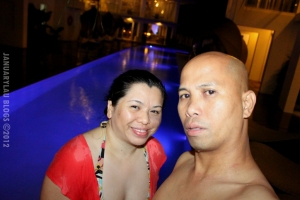 By 9pm we’re already back in Astoria and while Nanay decided to spend the night watching her much-awaited teleseryes, Leoncio and I decided to take a dip at the hotel’s swimming pool. It was beautifully lighted at night and we have it by ourselves all along. 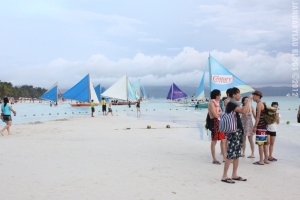 A peaceful sleep followed after a lengthy day. To be continued…